​Other sections of this story:

This is not a first time the weather played a significant role in choosing a route for a long flight. We initially planned to go the shortest route which would take us over Tennessee, Arkansas, Oklahoma into Durango, Colorado where we would stop for the night. Next day, more or less direct to San Jose. When we woke up at 4:30 AM that Friday morning we saw an angry ghost of the weather popped up right over our route of flight. The route we planned landed in a waste basket and we needed a new plan.

From the local forecasts it seemed that the southern route, along the border with Mexico, offered the most reasonable chance of avoiding thunderstorms, precipitation and turbulence. We looked at published TAFs (terminal area forecasts) and we saw generally clear weather, with some thunderstorm interference along the way but nothing major. We decided to take off and amend our route if necessary. The first stop would be Shreveport, Louisiana.

We packed the rental car with supplies (we carried a few six-packs of local Georgia beer to California) and headed to the airport. We arrived right at sunrise and took a nice picture of the plane at Lawrenceville. 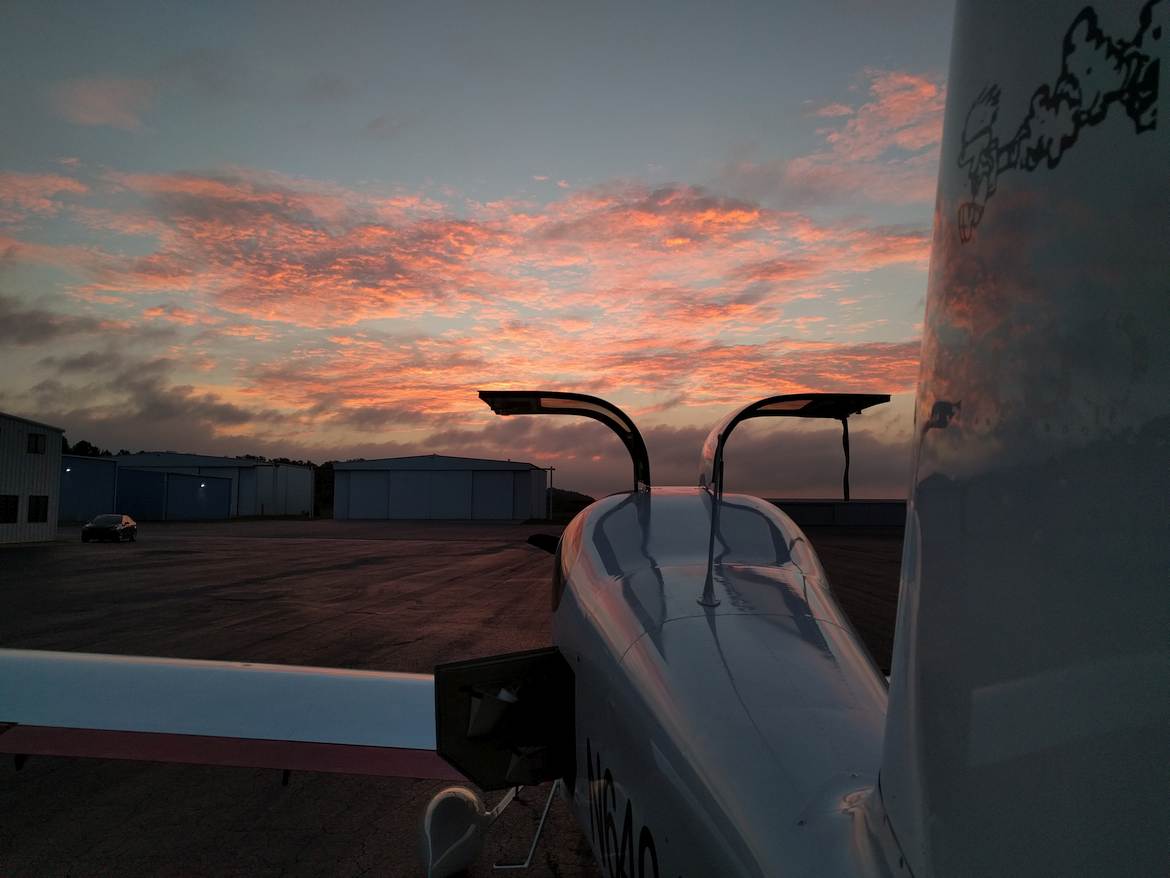 Paying for fuel, packing, pulling the airplane out of a hangar, preflight, returning the rental car took us about an hour. We called for taxi instructions but Gwinnett Tower told us they open at 7 AM. We taxied to runway 25 for departure to the west, completed a runup sequence, and took the runway for departure. As we were lifting off the runway the tower has opened. We continued to the west, climbing to 4,500, passing over Dobbins Air Reserve Base, above their class D but under Atlanta class B shelf. Continuing west, we climbed to 8,500. The weather was quiet, air was smooth and the engine was making purring noises. After an hour or so we reached a region of a low stratus, where airports below were reporting IFR due to low ceilings. A slight deviation to the south kept us in the clear.

ATC has informed us that Meridian 1 West MOA (Military Operations Area) is hot (active). We elected to transition through with traffic advisories. At one point we saw a fast moving jet about five miles from our position but no further contact with the military happened and MOA soon went cold. As we were getting closer to Louisiana, more and more patchy clouds started appearing. Arriving at Shreveport, the tower cleared us for landing in front of arriving Citation. I was still too high, and ill aligned with the runway so I elected to go around. On a go around, we observed a crop duster operating low in the airport space. I guess they were spraying anti-mosquito substances. After landing we took fuel (40.7 gallons) and ate some cookies provided by the FBO. We also learned that full service fueling at Shreveport was more than 20% more expensive than self fueling. Oh well.

Planning The Next Leg

The way onwards looked clear to some extent. We initially thought about going towards Albuquerque or even Santa Fe but there was a line of intense precipitation and thunderstorms right over north western Texas, blocking the way to northern New Mexico. We looked at the airports in south eastern New Mexico, considered Roswell, NM for a bit but ultimately decided to go to Cavern City Air Terminal near Carlsbad, New Mexico. We thought we should be able to reach the airport in time before the Carlbad Caverns National Park closed for the night.

Winds were favoring runway 23 at Shreveport and it was open for departures so we asked for taxi to 23 and got the approval from the ground control. After an uneventful departure (a bit flat departure since it was hot and humid and I wanted to maintain CHTs in climb) we were switched to Shreveport Approach for flight following to Cavern City. After meandering a bit around the clouds we found an opening big enough to fit through and climbed to 6,500 feet. At this altitude we were still around the cumulus cloud tops so we climbed to 8,500. We deviated a little bit to the south to avoid Dallas – Fort Worth class B area but were squeezed a bit by a thunderstorm that popped right south of Dallas. ATC apparently noticed our struggle and asked us if we wanted direct to destination. We gladly took the new route and were cleared into Dallas class B at 8,500. At one point we were looking for a descending 737 but we never actually saw it.

Leaving Dallas we also left the area of unsettled weather. We climbed to 10,500 to avoid cumulus buildups below us and remained there until almost the end. Passing over west Texas we noticed a lot of square shaped spots with a dirt roads leading to them. Since we just passed a field of wind turbines we thought those were new wind turbines being constructed or replaced. Only after we landed we realized our mistake. Those were not wind turbine spots, those were small oil wells. There were literally thousands of those all around west Texas and eastern New Mexico. Descending for landing in Carlsbad we got under those cumulus clouds and the ride became quite bumpy. I really like I can go above at least some weather in my RV-10!

We landed around 2 PM mountain time. After landing, we taxied to a fuel pump and took 36.9 gallons of fuel. We didn’t want a repeat of Shreveport full service vs. self service pricing so we self fueled. While I parked the airplane, Greg went into the FBO and got us a nice rental car so that we could get to Carlsbad Caverns National Park. When we asked for directions to the park, the person at FBO said, “oh, just take the first right turn off this highway here and you’ll be there”, and they were right. The park is very close to the airport (not close enough for walking though so plan on renting a car). We had enough time to walk down to the caverns, take the 2 km long walk through the main cave section, eat lunch and take the lift back to the surface. 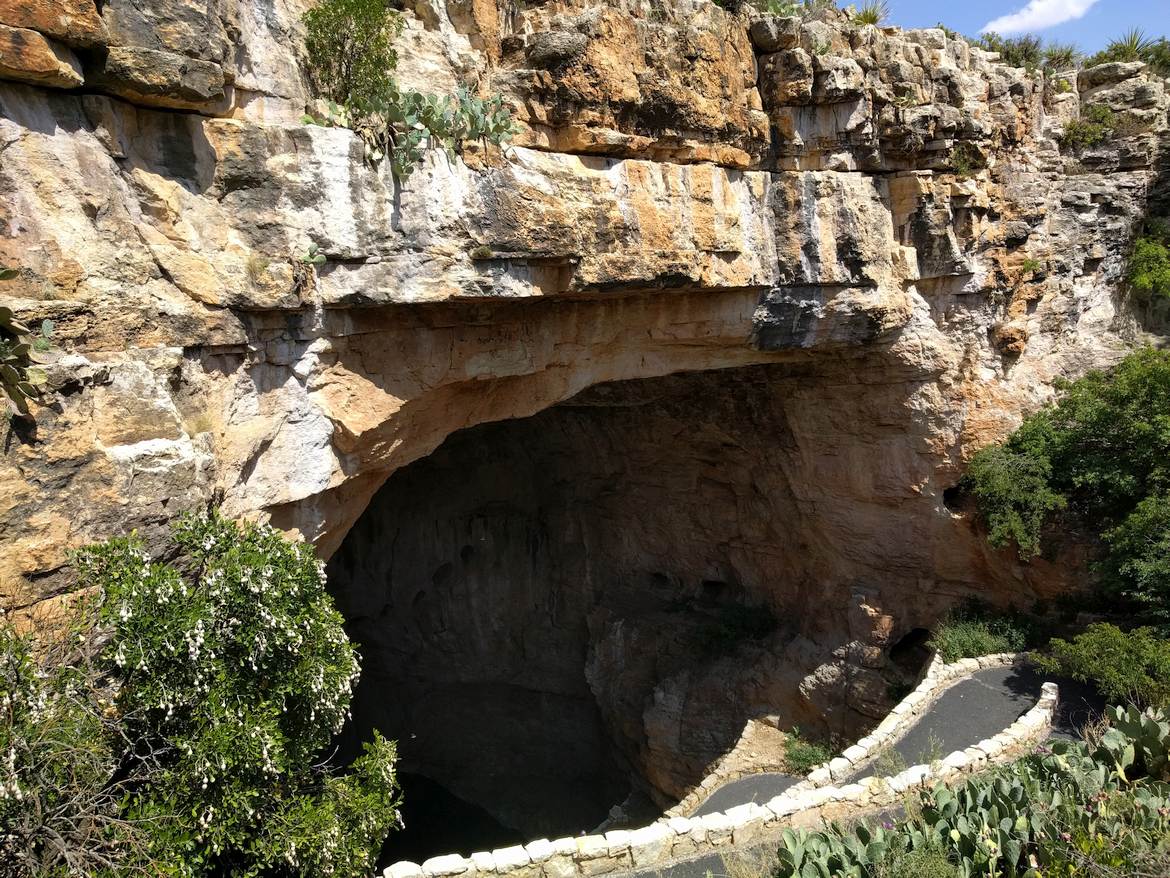 We spent a night at a hotel that Hotwire picked for us. The hotel was quite decent but it was located at the opposite end of the town, about 20 minutes by car. Carlsbad seems to be very long and thin for some reason, so getting to the hotel took us longer than expected. Again, we decided to get up early, to beat the convection in the mountains as much as possible. Got up at 4 AM mountain time, we were at the airport at 5:30 AM and in the air at 6:20 AM. The air was smooth. We picked up a destination of Blythe, California as a good, mid-way stopping point during the journey. The weather radar was showing a cell of precipitation drifting towards Blythe, so we were ready to divert to some other airport in vicinity of Phoenix should that cell not dissipate before we got there. The cell indeed intensified and became a thunderstorm right over the airport about two hours before we were scheduled to land there. Fortunately, by the time we got there, the cell dissipated and we were greeted by a clear sky. Shortly before landing Albuquerque Center handed us to LA Center which terminated our flight following within a minute of the transfer. Landed uneventfully, took fuel (37.3 gallons) and purchased some pre-made frozen sandwiches at the FBO. They looked bad but actually tasted good. 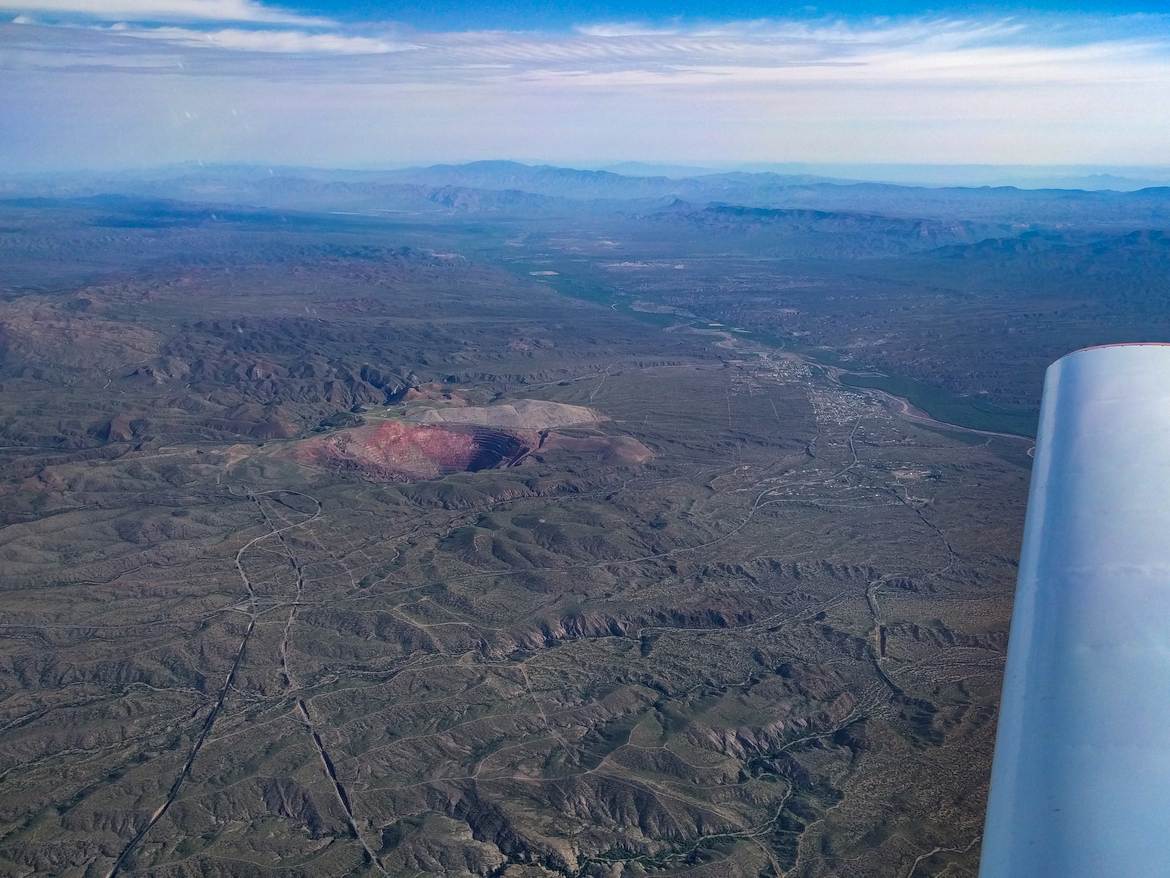 The last leg of this coast to coast journey took us over vast expanses of State of California. We took off to the north west and dealt with low visibility on climbout. Most likely, the front which passed a few hours earlier was kicking up the dust as we climbed. We obtained VFR flight following to San Jose from LA center. Our direct path (to the north west) would take us through some restricted areas, so we chose a bit more westerly heading initially. By the time we got to vicinity of Apple Valley, California, ATC cleared us through restricted area R-2515 which covers Edwards Air Force Base at 10,500 feet. We saw the long runway used by the Space Shuttle and noticed the runway extended into the dry lake bed. So if the Space Shuttle overran the runway, it still had several miles of the dry lake to stop.

By the time Joshua Approach handed us back to Bakersfield Approach the visibility started to deteriorate a bit. It was quite clear over the Central Valley but by the time we got into vicinity of Panoche VORTAC it was definitely 10 miles or less. Once we got over the Diablo Range, the visibility became so bad that I elected to control the airplane via the instruments because I couldn’t see the horizon clearly. Norcal told us to go to Pruneyard (a visual reporting point over San Jose) so I followed Santa Clara Valley north and then turned north-west towards Pruneyard. Only over San Jose the horizon became visible again. We were handed off to San Jose tower which cleared us to land on 30L without actually going to Pruneyard. On the ground we found out that the poor visibility was due to ongoing Soberanes fire which started the day we departed for Oshkosh and was only 15% contained by the time we got there.

Would I do it again? Yes, in an instant.