​When you go by the FARs, logging cross-country time requires a point of landing that is more than 50 nm straight-line distance from the original point of departure [as a reminder it is in 14 CFR 61.1(b)(3)(ii)]. But the traditional meaning of “cross country” would be to cross the country from coast to coast. So, on a beautiful July Friday, I set off for my first true cross country flight.

An additional goal (OK, primary goal, fine!) was to attend EAA Airventure 2016 at Oshkosh. Ada and I were there in 2013 but we have flown commercial then and camped in Camp Scholler. This time I was prepared to camp with my airplane! Too bad an RV-10 is a low wing, so you cannot really camp under the wing.

As with all my longer flights, I started checking the weather two weeks in advance. The weather was forecast clear and hot. The desert might have some afternoon thunderstorms, so I planned to take off as early as possible from San Jose so that I am out of the mountains or on the ground by mid-afternoon. I also requested a 50 hour inspection and an oil change from my friendly mechanic (as I wouldn’t have time to do it myself). Oil change was performed, oil analysis done, no anomalies were detected. The airplane was filled up and ready to go.

The plan was to get to Oshkosh over three days. On Friday we would take off from San Jose and get to Rawlins, Wyoming (KRWL), which is about half way through from San Jose to Oshkosh. The next day, Saturday, we would get from Rawlins to Baraboo – Wisconsin Dells airport (KDLL). I had two goals with this airport. First, it would be the last night in a real bed with a real bath before camping for four nights at Oshkosh. Second, KDLL is only 60 nautical miles away from Oshkosh. Spending the night there would enable us to be at RIPON a few minutes past 7 AM (the time at which Oshkosh opens for landing traffic). The internets agree that this is the best time to go land at Oshkosh since there is little traffic at that time. Read on to see what actually happened!

At almost the last minute, a coworker of mine, Lisa, who is a pilot and a CFI, volunteered to go with me. I welcomed another pair of eyes and an ability to hand off the airplane for some period of time, even if George The Autopilot was flying most of the time.

Camping stuff got packed, oxygen bottle got hydro tested and filled, route loaded into the tablet, phones charged, GPS trackers charged, food and drink prepared, including 4 gallon water tank taken just in case we had to land somewhere in the desert, far from civilization. We were ready to go.

We could probably make it to Rawlins with no intermediate landing but we deferred the decision until we get a better sense of the fuel burn. On departure, San Jose tower directed us to course 020, which was more or less on course considering that we planned to follow Interstate 80 most of the time. Climbed to 13,500, turned the oxygen on and enjoyed 25 knot tailwind with true airspeed around 150 knots. Passed Blue Canyon, Truckee and Reno uneventfully. Between Reno and Elko, ATC advised us that there is a Cirrus trying to pass us. It took him a lot of time to catch up and we were on a converging course so I throttled back, slowed down and got out of the way of the “faster” airplane. I just wasn’t comfortable with that converging course and the fact that we couldn’t pick him up visually.

Coming over eastern Nevada, our ADS-B loaded a string of thunderstorms over Wasatch Range, east of Salf Lake CIty. The passage north of Salt Lake City looked clear but we decided to land in Wendover and take fuel since we were not sure what kind of maneuvering we will need to do to get around the popping thunderstorms. At Wendover, we picked 33.1 gallons of fuel, confirming cruise fuel burn of around 10.5-11 gallons per hour.

Well, not everything goes as planned, and this leg is a solid proof.

On the ground, we hid in the air conditioned hut. It was hot, weather reported 37 degrees C. The density altitude was 7,300 (field elevation is 4,237). By the time I taxied to runway and performed a run-up, my oil temperature was already 198 F. Then I made a mistake of … leaning the airplane for max power. Yes. You read that right. It was a mistake. Let me tell you a story because clearly, you are curious. All the books tell you that you need to lean for maximum power at high density altitude situations. This is generally true but max power can be achieved in a quite wide range of rich-to-lean mixtures at any given elevation and density altitude. My mistake was to lean too much, I still got the max power but cooling to the cylinder heads was diminished. That, combined with hot engine, hot outside air and limited airflow during takeoff and initial climb caused overheat warnings to appear for cylinder heads and oil temps at about 300 AGL. Those temperatures skyrocketed due to mixture being too lean. I enriched the mixture managing not to kill the engine and the temperatures started coming down. Meanwhile we came back to the airport but by the time I aligned with a runway to land the CHTs were already in the green and oil temperature, while still in the red, was coming down quickly. We circled the airport, came back over I-80 and commenced the slow climb with rich mixture. Oil temperature came back to normal and we flew on.

Coming over Great Salt Lake, a thunderstorm cell developed right over the Salt Lake City. We diverted to the north, around class B and around the cell. We flew on to the north east, over the lake and then over the Cache Valley. We finally entered Wyoming but the radar was showing a developing north-south line of thunderstorms ahead of us, basically between Kemmerer and Fort Bridger, WY. We could deviate to the north, around 200 miles north was clear. South was blocked by a solid line of precipitation over the Wasatch range. After much deliberation we diverted back to Logan, Utah and decided to call it a day. At Logan we picked up 23 gallons of fuel. We got two rooms at Days Inn and Suites in Logan, rented a car to get there and after a short rest walked to Angie’s Diner for dinner. The food was plentiful and good, after the excitement of the first day of the trip. 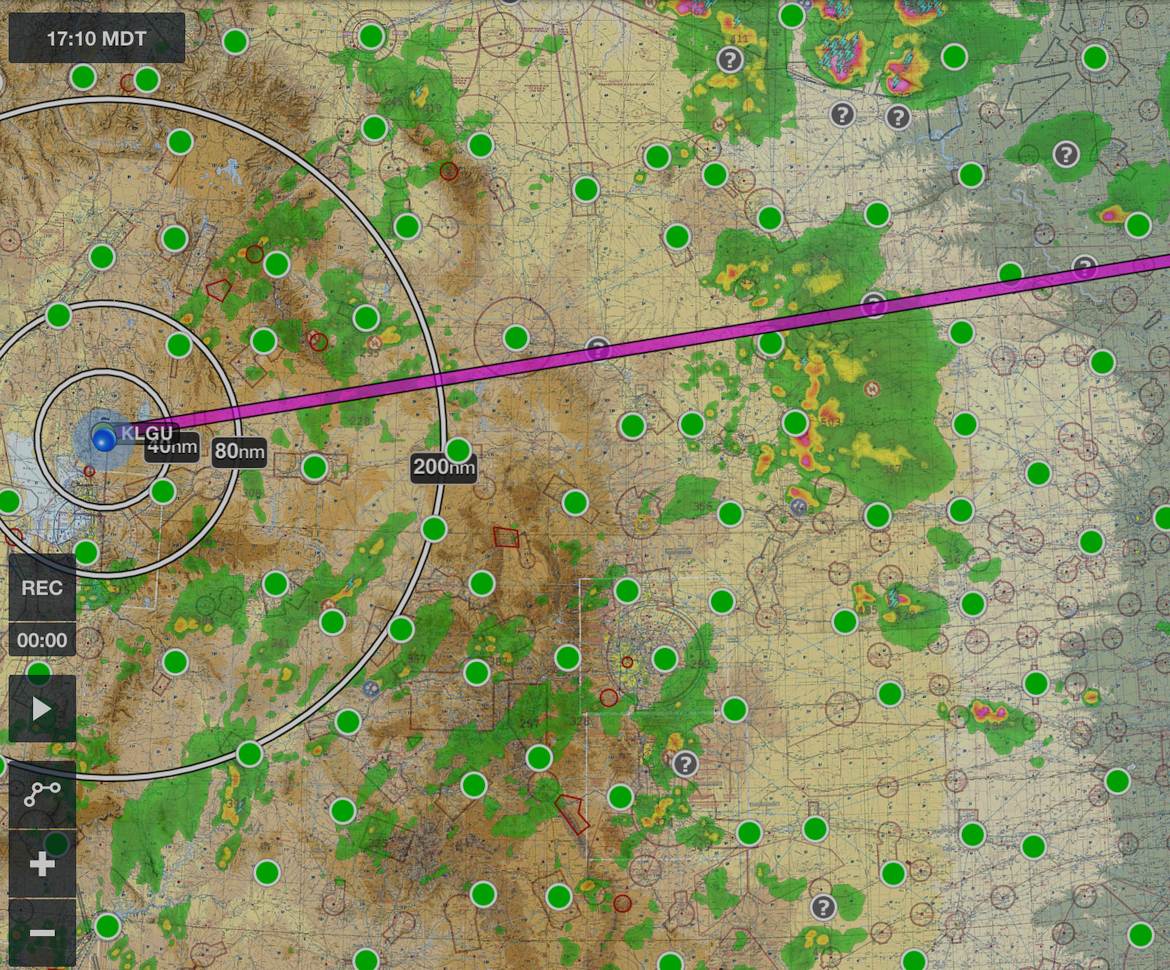 We ate the dinner at Angie’s and we got sleepy. I was asleep by 9 PM, with an alarm clock set to 4:30 AM. We got to the airport at the first light, pre-flighted and loaded our new route. The car rental keys were dropped into the maintenance hangar since the FBO at LGU wasn’t yet open when we departed. Decided to climb to 13,500, plug in the oxygen and go as far east as possible. There was a weather system blocking the direct way to Wisconsin, with an opening to the north so we decided to head to the north east to get to that opening between the fronts.

Getting up very early to avoid most of the weather will be the prevailing theme at this trip. At 13,500 over western Wyoming we tried to pick up flight following but neither Salt Lake Center nor Casper Radio was able to hear us. We were too low over the unpopulated terrain to be picked up by them. Continued to east-north-east, in direction of Rapid City, South Dakota (airport identifier KRAP, no comments). The weather opening was around Fargo, North Dakota so we continued in that general direction. Further weather reports showed that most of the weather over Wisconsin is moving to the north east but the weather over North Dakota was moving almost directly east. That had two major implications: first, the gap we were seeing would rapidly close up, and second, even if we manage to get through the gap, we would be heading down towards the other system, which was undesirable.

Thus, we decided to divert around the Wisconsin system to the south. Changed the heading to east-south-east and went towards Pierre, South Dakota. When there, we had enough fuel to continue a little bit further towards the escaping weather so we decided to go further out, to Mitchell, South Dakota. We landed at Mitchell, and took 41.2 gallons of fuel. We also ate lunch which Lisa prepared before leaving San Jose. At the Mitchell airport, there was a Young Eagles event, where pilots took kids for airplane rides. By the time we came over 50 kids were flown, with more waiting in the line. 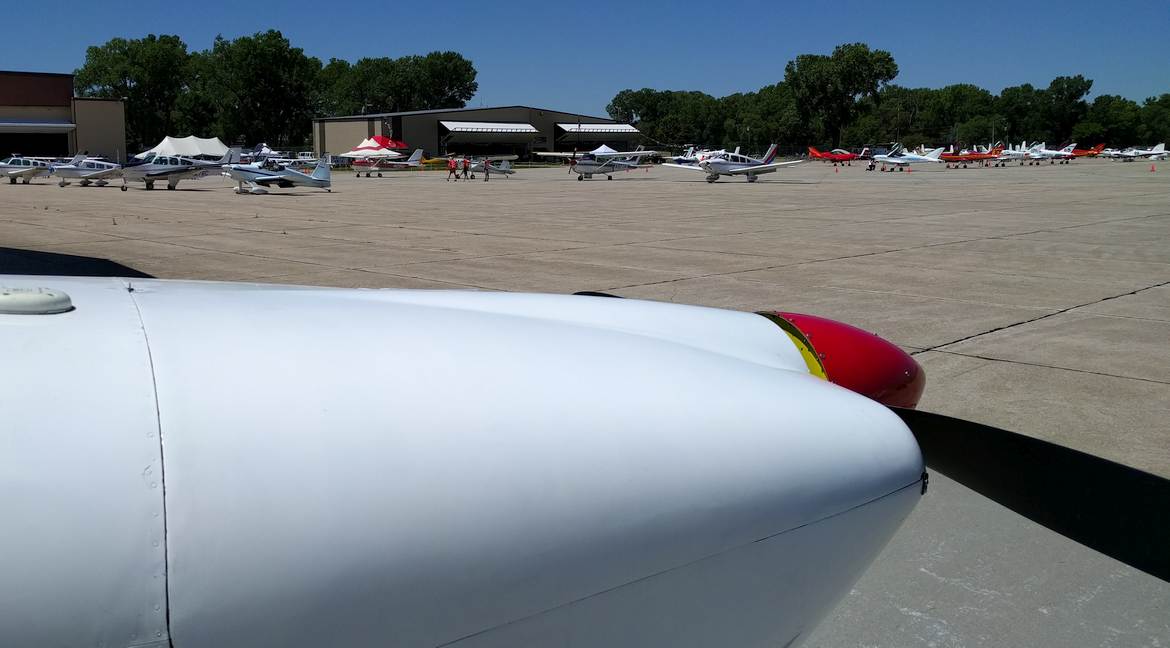 On any cross country flight, the weather is important. It becomes very important on a long cross country flights, where you might be diverting a long way around the weather. Better be prepared for it.  Sitting at the air conditioned FBO in Mitchell we looked at the huge system pummeling mid-western states and wondering how we could get around it. See for yourself below. 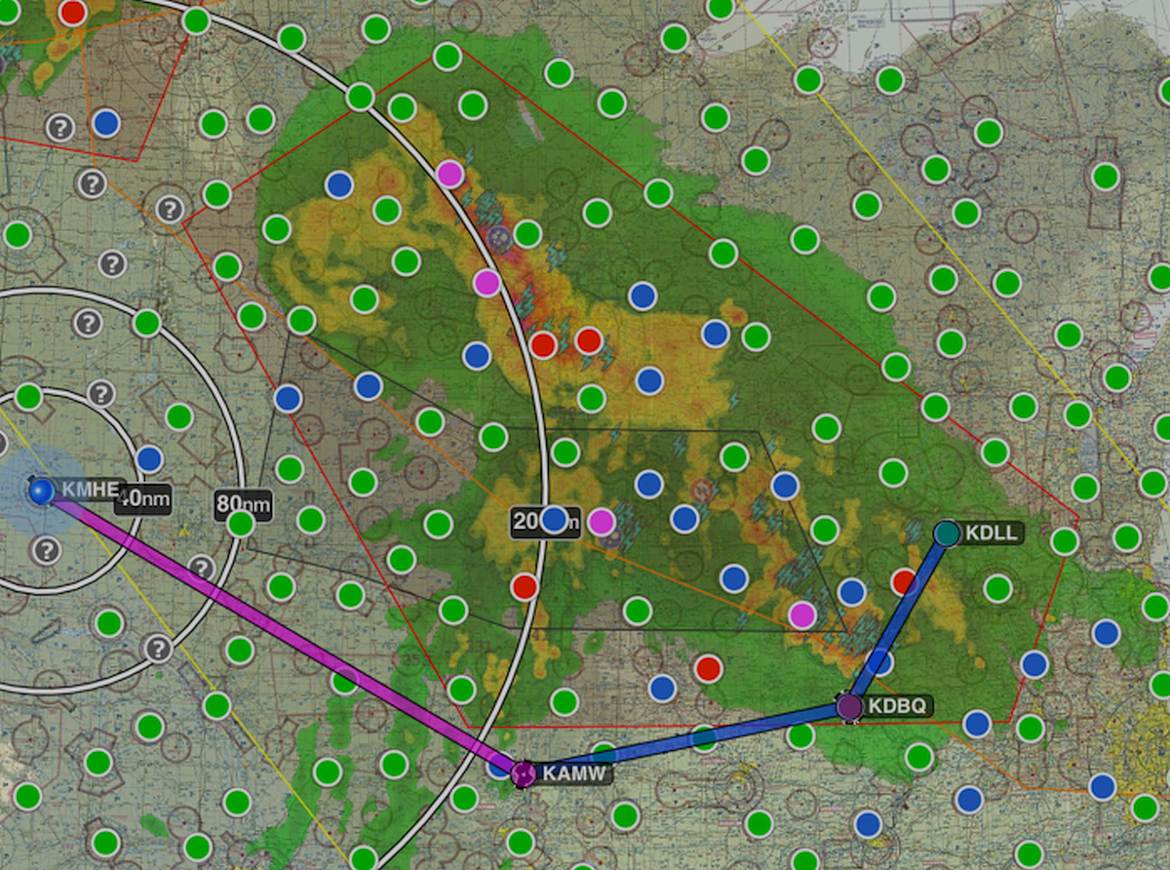 Routing around this huge weather system was a challenge.

Instead of going direct (d’oh), we went south, towards Ames, Iowa and swinging to the north towards Dubuque, Iowa. At the time of our projected passage, Dubuque was forecasting clear skies and calm winds. Wisconsin Dells was forecasting good visibility, ceiling of 9,000 and light rain for our arrival.

We still had to contend with the line of precipitation before arriving at KAMW (Ames, Iowa). Going there, we did not feel comfortable negotiating around some of the cells that were growing bigger, so we diverted even more to the south, towards Des Moines, Iowa. This is how Des Moines looked like from our plane. 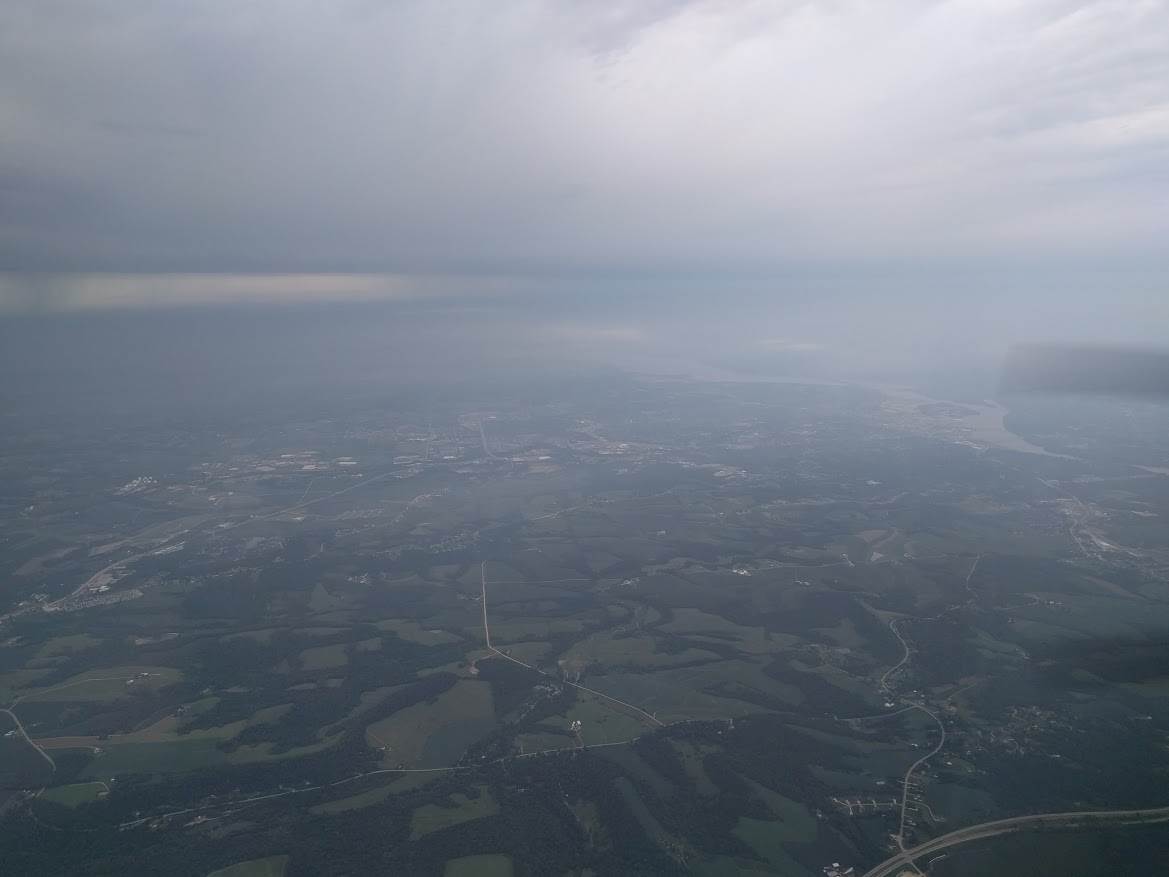 ​We got some light precipitation on the windshield but nothing alarming. Continuing south east for a bit we evaluated the weather reports from the Dubuque and Wisconsin Dells area. For awhile we contemplated skipping Wisconsin Dells and going straight to Oshkosh, as it seemed the way near Lake Michigan, over Milwaukee, was open. This quickly proved infeasible due to intense thunderstorms that popped up in Milwaukee area. We decided to continue up to the original destination of Baraboo – Wisconsin Dells. 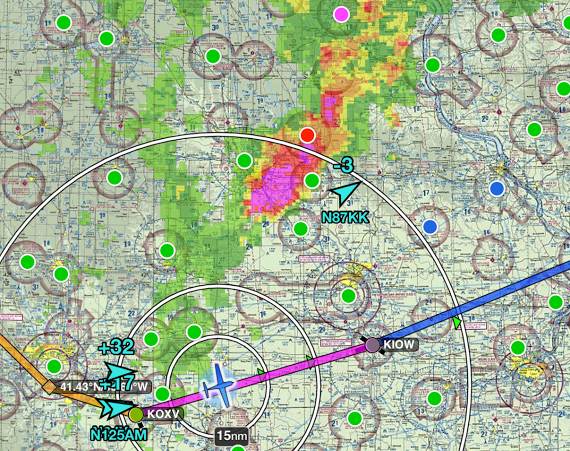 The small precipitation areas we saw at Mitchell bloomed into a huge and intense thunderstorm. 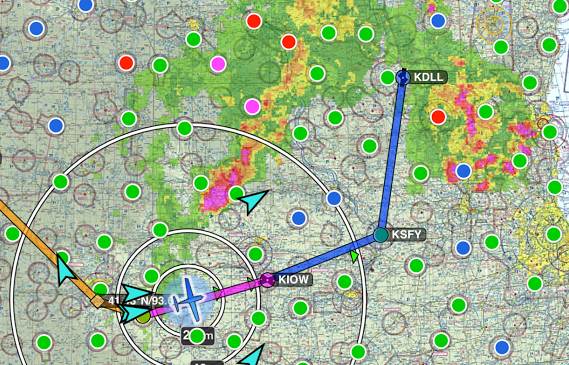 The way to Oshkosh is blocked but it seems we would be able to get to the Wisconsin Dells before the line of thunderstorms arrives.

​The initial weather report at KDLL was 3 miles visibility, light rain, so marginal VFR conditions. As we got closer, it was improving. When we decided to land, the rain was falling, but the wind was quiet, and the landing was uneventful. We taxied to the FBO, got the plane tied down and covered and headed to the hotel for the night. No later than an hour after we landed the line of thunderstorms we were chasing and then escaping from, arrived. We were glad to be at the hotel.